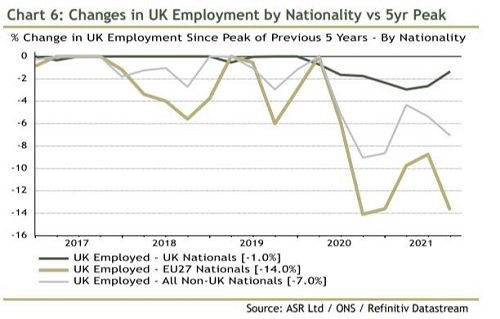 UK businesses are finding it more difficult to meet their staffing needs after Brexit, according to the latest CBI Employment Trends survey. And they are starting to look nervously over their shoulders at the new paperwork required from New Year when the UK finally introduces full Border Controls.

As the chart shows, the number of EU nationals employed in the UK has seen a 14% fall since Brexit took place last year. This compares to just a 1% fall for UK nationals. And it reflects a number of different factors:

In addition, as the CBI report also notes, nearly 2/3rds of companies are worried about their ability to move UK workers across the EU. Before Brexit, the Single Market meant their employees could work anywhere in the EU. But now, as the House of Lords has noted:

And from January, a new set of bureaucracy will come into force as the UK introduces its own Border Controls. As the government notes, this means:

One key issue is that companies will now need to keep careful track of their ability to qualify under the Trade & Co-Operation Agreement for zero tariffs and zero quota arrangements for UK-EU trade. This means meeting all the new rules covering Rules of Origin, and being able to produce all the detailed paperwork needed to prove this entitlement.  Please click here if you would like to learn more about the Rules of Origin issue.

Another ‘sting in the tail’ is that many traders haven’t realised they have needed to prove detailed compliance with Rules of Origin since January this year.  As the government warns:

“For goods imported between 1 January 2021 and 31 December 2021, traders have up to 175 days to complete Customs Declarations.  From 1 January 2022, if a supplier’s Declaration is needed, businesses must hold these at the time they issue a statement on origin. They should also have obtained them, or other information demonstrating the originating status of their goods, for any statements on origin they’ve issued during the easement period from 1 January 2021 to 31 December 2021. If UK exporters don’t have this information, then if subject to verification by the importing Customs authority, their EU customer may have their preference claim denied.”

Please contact us if you need help to better understand these complex issues.