Opinion over Brexit has shifted sharply over the past year as the reality of Brexit has become clearer. Less than 1 in 5 of those who voted for Brexit now think that it has gone as well as they had expected.

Businesses have to comply with detailed Rules of Origin paperwork from 1 January. And that the 175 day “grace period” for providing Customs Declarations is coming to an end. 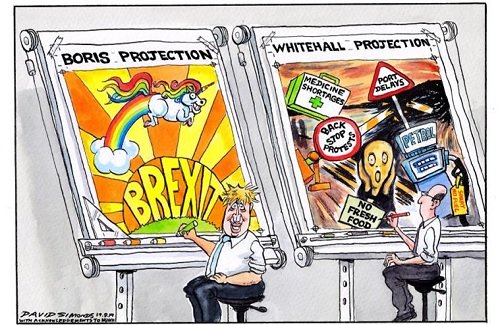 Unsurprisingly, it turns out that Brexit still isn’t “oven-ready”, despite the UK government’s promises back in 2019. Instead, as Ready for Brexit warned all along (and The Times cartoon confirms), it is set to lead to years of dislocation and disruption for the UK economy.

Of course, the pandemic made things worse. But it also allowed the government to claim that many Brexit-related problems were somehow related to Covid. And now that fiction is being exposed, as the UK economy suffers from the labour and food shortages that were long predicted by those involved with day-to-day business.

Amazingly, some Conservative MPs even think this might be a “good thing”, with one telling the party Conference this month:

“It is in our mid and long-term interest that these logistics chains do break. It will mean the farmer down the street will be able to sell their milk in the village shop like they did decades ago. It is because these commercial predators – the supermarkets – have wiped that out and I’d like to see that come back.”

The problem for the UK is that today’s supply chain problems are actually focused on Great Britain.

N Ireland is still in the EU Single Market and has avoided the UK’s problems with queues of cars in search of petrol.  Its economy is adapting well to the change, with exports to Ireland rising 77% since Brexit (€800m).

“Boris Johnson promised to tear up the Protocol before he signed the Brexit deal”.

In other words, Johnson planned all along to break the international treaty that he negotiated, signed, recommended to Parliament – and used as the basis for his election win in December 2019.

It seems the UK government hadn’t expected this move. And it now faces a difficult decision:

Suspension would take the UK further into uncharted water. It would not only be breaking an international treaty, signed less than 2 years ago.  Escalation would also cause a major break with the USA. The “Irish vote” is a powerful voice in US politics, and Republicans and Democrats have already made their support for Ireland very clear.

The EU’s patience is also wearing thin. It has other more important issues on which to focus. France, Germany, the Netherlands, Italy and Spain are all pressing Brussels to prepare for a trade war with the UK, if it doesn’t now implement the treaty it signed. One option could even be termination of the EU-UK Trade Co-operation Agreement, which guarantees tariff-free trade.

Logic would suggest the UK will accept the EU’s offer. But logic has not played a major role in Brexit so far. UK business now needs to speak up very strongly if it wants to avoid an EU trade war, and a major row with the USA.

It is guaranteed that there will be non-tariff barriers, new regulations, requirements for customs paperwork and delays on all shipping routes to, from and through the UK.

Welsh red meat exports are worth £200m a year, with over 90% of the trade being with the EU.

Brexit is set to cause at least two years of disruption for the pharma industry suggests Wasdell Group CEO, Vincent Dunne.

Are you expecting a No Deal Brexit in January?

Unfortunately, a hard Brexit remains the most likely outcome when the UK transition period ends on 31st December. At the moment, it seems unlikely the trade negotiators will even agree a Mutual Recognition Agreement (MRA) between the UK and the EU for medicinal products, despite pleas from the Association of the British Pharmaceutical Industry and the European Federation of Pharmaceutical Industries & Associations.

Uncertainty therefore abounds.  A No Deal Brexit would lead to the UK trading on World Trade Organisation terms. But even if a trade agreement is reached, it could take many different forms, for example:

At best, therefore, most analysts expect at least two years of disruption.

How do you see the key issues for pharma companies?

Most pharma companies have been proactive and put contingency plans in place to manage Brexit disruption. Now they are once again having to review the various uncertainties and their potential impact on key areas such as:

So, what can pharma companies do at this stage?

It is important that pharma companies continue to plan for a worst-case scenario, with particular focus on mitigating its impact on all aspects of pharma supply chains. Companies need to identify risks in the supply chain and to their ability to comply with new requirements – and prepare for each eventuality. It will also be crucial for companies to assess any potential impact on product market authorisations and determine if products will need to be registered nationally.

One strategy that many companies have adopted is stockpiling throughout their supply chain, including at pharmacy level. However, this is only a short-term preventative measure, and only viable for certain drug products. A more robust plan will need to be adopted as soon as possible.

Historically, pharma supply chains have been quite inflexible, with a heavy reliance on the successful management of inventories. However, pharma companies may now look to engage with contract organisations, such as the Wasdell Group, to facilitate flexibility and agility in their supply chains by using their facilities, processes and QP services in both the UK and EU, particularly during these times of uncertainty.

Join Ready for Brexit today to download our Brexit toolkit – The Brexlist checklist, the detailed Brexplan planner and the Brexsure audit tool for your supply chain partners

Only a quarter of UK businesses are ready for Brexit

Business organisations have been quick to respond to the general election results. Anna Tobin investigates what they had to say